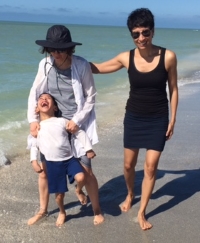 Marta Siemiarczuk was interviewed by author Amanda Jerome for this article, originally appearing on The Lawyer’s Daily website on February 28, 2017, published by LexisNexis Canada Inc.

Lynda Collins and Natasha Bakht are colleagues at the University of Ottawa’s Faculty of Law, they are friends, neighbours, and now they’re “co-mamas” to a boy named Elaan.

Elaan was born in February 2010 to Bakht through the help of the Ottawa Fertility Clinic and a sperm donor. Collins was there for her friend as a birth coach and continued to be a source of support as Elaan, who has spastic quadriplegia, grew up. She attended medical appointments, helped her friend with raising Elaan, and all three went on trips together.

When Collins decided she wanted to become a parent herself and adopt a child, her mind turned to Elaan and she brought up the idea of coparenting to Bakht. The friends were already operating as a family unit, so it seemed like a natural progression that they’d become one legally.

“I think that their situation specifically is something that’s really going to keep our conversation going especially as family lawyers on topics of what does it mean to be a family and how do we look at what a family is,” said Marta Siemiarczuk, a family lawyer at Nelligan O’Brien Payne LLP who helped Collins gain a declaration of parentage in court last year.

“We’re seeing more recognition of that already with the new legislation that was passed in Ontario with the All Families Are Equal Act and the amendments that were made to sort of recognize that the days of just two-parent families are of the past and we’re moving into the future.”

Collins and Bakht’s situation is unique because they are friends and not in a conjugal relationship, so Collins was unable to legally adopt Elaan.

“Initially when we approached it we looked at the different pieces of legislation,” explained Siemiarczuk. “We looked at the issue of adoption instead of a declaration of parentage. We looked at case law dealing with declarations of parentage historically and, unfortunately because Lynda and Natasha aren’t spouses, they couldn’t utilize the Child and Family Services Act adoption provisions
without Natasha giving up her parental rights.

“We considered doing a constitutional challenge to that piece of legislation, but when you have a child with so many significant financial and time needs, mounting a constitutional challenge is tough financially and emotionally. So we looked at the case law surrounding declarations of parentage under the Children’s Law Reform Act and the courts have under those provisions used their parents/patronage jurisdiction to make declarations of parentage where we’re talking about cases of multi-parent families,” added Siemiarczuk.

Collins said they had to bring compelling evidence to the court to show that she was playing a major role in Elaan’s life and that she was also a good parent.

“We got affidavits from Elaan’s pediatrician who specializes in treating children with complex medical needs and knew the family and knew how we’d interacted in stressful times and in happy times. We got an affidavit from the principal of his special needs school who has 20 years of experience in educating children with special needs and had known our family over a period of several years,” said Collins.

Their case was successful and Collins was granted a declaration of parentage. In January they received Elaan’s updated birth certificate, which includes both women’s names on it.

Collins hopes she and Bakht’s story gains the attention of the attorney general and leads to amendments to the All Families Are Equal Act.

“It is very well intentioned and it is a progressive piece of legislation and it does improve situations for samesex couples who are coparenting and people who have used reproductive technologies, but in expanding the definition of family there’s a provision that’s basically a cutoff,” she said. “So it says there’s all these new definitions of parentage, but the court can only issue a declaration of parentage in those enumerated circumstances, so it actually eats into the court’s inherent parent/patronage jurisdiction, which is unusual.”

Collins said although the All Families Are Equal Act helps a large group of people, for those like herself and Bakht who are in a different unique situation, it actually feels like a step backward.

“It kind of goes without saying, but anything we can do to encourage responsible adults to parent children, particularly vulnerable children, we should do,” she said. “Certainly the law should be absolutely facilitating healthy, happy parenting and the All Families Are Equal Act does do that for a large group of people, but it does have a defect that I think needs to be fixed.”

“We’re aware already, since our story was released, that different people have been writing letters to Premier Wynne to say this may not have been your intention, but you’ve restricted us. The law is such that our family isn’t included,” added Bakht.

Elaan’s family, as well as Siemiarczuk, hope that their story will help advance the conversation in family law across the province.

If you have further questions about declarations of parentage, contact our Family Law Group.