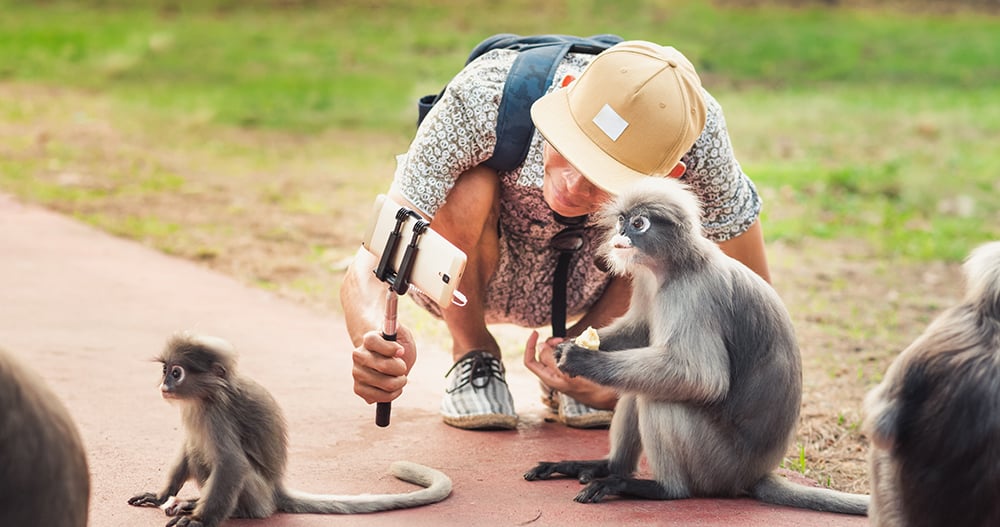 Monkeys may be our closest relatives on the evolutionary tree, but are their creative works entitled to copyright protection like ours are?

What about an accidental selfie?

Readers may have read about the dispute over the so-called “monkey selfie” taken in 2011 by a macaque named Naruto. You can see the photo here. While this case was ranked as the most ridiculous lawsuit by the U.S. Chamber of Commerce Institute for Legal Reform, it is worth discussing as a reminder of what constitutes an “author” of a creative work, and the limitations to copyright protection.

This case goes way back to 2011, when wildlife photographer David J Slater was in an Indonesian national park taking photos of endangered crested macaques. When he stepped away from his camera for a moment, a macaque named Naruto grabbed the camera and took a bunch of photos, including the now-infamous monkey selfie.

The image of Naruto’s toothy grin went viral, and the photo later found its way to Wikipedia. When Slater requested that the photo be taken down because he owns the copyright to it, Wikipedia argued that since it was taken by an animal, then it is uncopyrightable.

In 2014, the United States Copyright Office clarified the issue by releasing a statement on copyrightable authorship that confirmed that “The Office will not register works produced by nature, animals, or plants [for example:] A photograph taken by a monkey.”

This didn’t stop People for the Ethical Treatment of Animals (PETA) initiating a copyright suit in 2015, after Slater used one of the self-portraits in a photography book he published, “Wildlife Personalities”. PETA argued that publishing the photo infringed on Naruto’s rights under US copyright law. Slater, on the other hand, argued that Naruto couldn’t own the copyright as he is a monkey.

In 2016, a San Francisco judge ruled that copyright law did not extend to animals, saying that “while Congress and the President can extend the protection of law to animals as well as humans, there is no indication that they did so in the Copyright Act.”

Undeterred, PETA appealed that ruling. Last week, the Ninth Circuit Court of Appeals released its decision in this case, dismissing the appeal. The panel stated that Naruto the macaque “had constitutional standing but lacked statutory standing to claim copyright infringement of photographs known as the ‘Monkey Selfies’”.

There was also heavy criticism in the decision of PETA’s actions in pursuing this case: “PETA’s real motivation in this case was to advance its own interests, not Naruto’s” and that the organization “seems to employ Naruto as an unwitting pawn in its ideological goals.”

What about in Canada?

The copyright laws are slightly different in Canada compared to the United States, but when it comes to an animal’s copyright entitlements, there is some similarity. In essence, if a case like this ended up in a Canadian court, a monkey could not claim copyright protection for a photograph that they had “taken”.

At a basic level, the monkey (or its representatives) would not have a case because the Canadian Copyright Act requires that the creator of the work be a citizen/resident of Canada or a treaty country (that is, a Berne Convention country, a Universal Copyright Convention country or a World Trade Organization member).

Obviously, an animal cannot become a citizen of a country; and neither can it win the Pulitzer Prize for Photography.

For more about copyright ownership, contact our Intellectual Property Group.