A legal timeline of 2SLGBTQ+ Rights in Canada 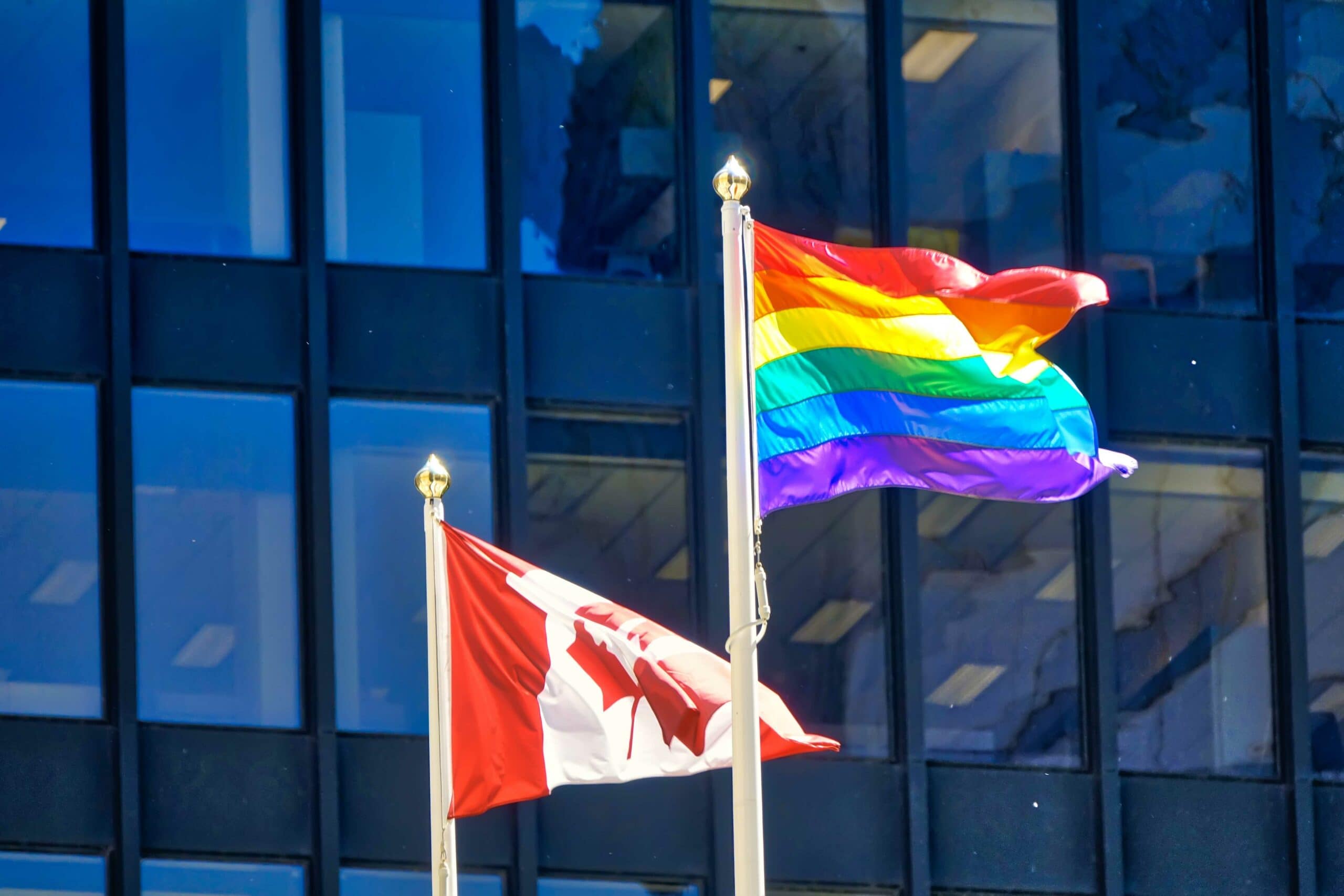 2SLGBTQ+ rights have come a long way in Canada.

Our Family Law group has created a timeline that revisits key legal decisions and events that have contributed towards progression 2SLGBTQ + rights in our country. While progress has been made, it is still important to recognize that there is a large gap between legislated rights and having actual equality in society.

During the 1950s and 1960s, the RCMP monitored the activities of private individuals suspected of being gay. The Directorate of Security and Intelligence had a unit referred to as A-3. It was dedicated to removing all homosexuals from government and law enforcement. The unit produced a map of Ottawa depicting the residences of suspected homosexuals and their gathering places.

During the same period, the Canadian civil service led an anti-homosexual campaign to purge gays and lesbians from the ranks of government and the military. Predicated on the premise that homosexuals possessed character weaknesses which posed a threat to national security, the “security” campaign led to the identification of thousands of suspected gay men and lesbian women. Members who admitted to being homosexual were discharged from the Canadian Armed Forces, sometimes dishonourably. The Canadian military continued its official policies of discrimination against homosexuals until 1992. Gay members of the military who served during this time remained closeted.

Everett Klippert was the last person incarcerated in Canada just for being gay.  While being questioned about a suspected arson, Everett Klippert, a Northwest Territories mechanic acknowledged to police that he had consensual sex with men and would be unlikely to change. In 1967, Klippert was sent to prison indefinitely as a "dangerous sex offender".  This was regardless of his partners being consenting adults, and regardless of his cooperative and honest nature with the entire judicial process, and regardless of usual criminal protections against self-incrimination.  His sentence was appealed to the Supreme Court of Canada that same year.  In a controversial 3-2 decision reflecting systemic discrimination of the time, the Supreme Court made it the  policy of Canada to imprison as dangerous offenders --  potentially for life without appeal -- anyone who had consensual sex with a same-sex partner.  The Supreme Court called it preventive detention. Tommy Douglas spoke in Parliament of the injustice of the decision. Justice Minister Pierre Trudeau proposed amendments to the Criminal Code which, among other things, would relax the laws against homosexuality.
1965
1968

On December 21st 1968, Justice Minister Pierre Trudeau introduced the Criminal Law Amendment Act, 1968-69, to reform the Criminal Code, on broad-ranging social issues such as homosexuality, abortion and contraception. In one of the better-known public “dialogues” between Parliament and the Supreme Court, Trudeau stated about his bill:

“I feel that it has knocked down a lot of totems and overridden a lot of taboos and I feel that in that sense it is new. It’s bringing the laws of the land up to contemporary society I think. Take this thing on homosexuality. I think the view we take here is that there’s no place for the state in the bedrooms of the nation.”

May 14, Trudeau's amendments pass into the Criminal Code, decriminalizing homosexuality in Canada.   Prior to this, consensual sex between men had been punishable by life imprisonment.

Despite the Criminal Code amendments passing into law in 1969, Everett Klippert is not released from prison until 1971.

In December, Quebec includes sexual orientation in its Human Rights Code, making it the first province in Canada to pass a gay civil rights law. The law makes it illegal to discriminate against gays in housing, public accommodation, and employment.

On February 5th, 1981, more than 300 men are arrested following police raids at four gay bath houses in Toronto, the largest mass arrest since the War Measures Act was invoked during the October Crisis. The next night, about 3,000 people march in downtown Toronto to protest the arrests. This is considered Canada's 'Stonewall'.

The Parliamentary Committee on Equality Rights releases a report titled "Equality for All." The committee writes that it is shocked by the high level of discriminatory treatment of homosexuals in Canada. The report discusses the harassment, violence, physical abuse, psychological oppression and hate propaganda that homosexuals live with. The committee recommends that the Canadian Human Rights Act be changed to make it illegal to discriminate based on sexual orientation.

Delwin Vriend, a lab instructor at King's University College in Edmonton is fired from his job for being gay. The Alberta Human Rights Commission refuses to investigate the case because the Alberta Individual Rights Protection Act does not cover discrimination based on sexual orientation. He would eventually take his case to the Supreme Court in 1998, a decision which would help define the Charter of Rights and Freedoms

Ban on homosexuals in the military lifted

As a result of the decision in Haig and Birch v. Canada, federal Justice Minister and Attorney General of Canada, Kim Campbell announced that Canada was lifting its ban on homosexuals in the Canadian Forces, allowing them to serve openly and live on-base with their partners.

This is the first decision of the Supreme Court of Canada to consider equality rights for gays. In the Mossop case, the Supreme Court of Canada rules that the denial of bereavement leave to a gay partner is not discrimination based on family status defined in the Canadian Human Rights Act. The case is significant as one of Justice L'Heureux-Dube's most famous dissents where she proposes that the definition of “family” must evolve to reflect reality of non-traditional families.

Jim Egan had been an activist since the late 1940s and took his case for his spouse, Jack Nesbit to receive OAS spousal allowance, to the Supreme Court. Egan v. Canada stands today as a landmark Supreme Court case which established that sexual orientation constitutes a prohibited basis of discrimination under section 15 of the Canadian Charter of Rights and Freedoms. Although Egan lost the case, all nine judges agreed that sexual orientation is a protected ground and that protection extends to partnerships of lesbians and gay men.
1995
1995

An Ontario Court judge finds that the Child and Family Services Act of Ontario infringes Section 15 of the Charter by not allowing same-sex couples to bring a joint application for adoption. He rules that four lesbians have the right to adopt their partners' children. Ontario becomes the first province to make it legal for same-sex couples to adopt. British Columbia, Alberta and Nova Scotia follow suit, also allowing adoption by same-sex couples.
1995
1996

The Supreme Court determined that a legislative omission can be the subject of a Charter violation. The case involved a dismissal of a teacher because of his sexual orientation and was an issue of great controversy during that period. He was prevented from making a complaint under the Alberta Individual Rights Protection Act because the legislation did not include sexual orientation as a prohibited ground of discrimination.

Political candidate calls for execution of all homosexuals

During an all-candidates debate held before students at Sudbury Secondary School in September 2008, independent candidate David Popescu was asked for his views on same-sex marriage. "I believe that homosexuals should be executed," he responded. He repeated the comments in an interview with a Toronto radio station. Popescu was eventually charged and convicted with promoting hatred. At his 2009 trial, Ontario Court Justice Guy Mahaffy ruled "has clothed his disgraceful attitude to this community of people (gays and lesbians) in a religious context and in my view should not be allowed." Popescu was sentenced to 18 months of probation.

Jamie Hubley, son of Ottawa City Councillor Allan Hubley commits suicide after years of being bullied by his classmates for being openly gay. The incident prompts the Legislative Assembly of Ontario to pass the Anti-Bullying Act which imposes stiffer penalties for bullying in schools, and which passes in 2012.

On February 28, 2016, CBC News reported that Prime Minister Justin Trudeau intended to recommend that a pardon under the authority of the Royal Prerogative of Mercy be granted posthumously to George Klippert, the last person in Canada to be imprisoned for homosexuality.

Amend CHRA and Criminal Code to include gender identity and expression

June 19 - Bill C-16 is passed and put it into immediate force. The law updated the Canadian Human Rights Act and the Criminal Code to include "gender identity and gender expression" as protected grounds from discrimination, hate publications and advocating genocide. The bill also added "gender identity and expression" to the list of aggravating factors in sentencing, where the accused commits a criminal offence against an individual because of those personal characteristics. C-16 represents the first time such a bill has been put forward by the governing party in the House of Commons.

Federal Apology for State Surveillance and Discrimination of LGBTQ2S

Prime Minister Justin Trudeau offers an apology to the LGBTQ2S community in the House of Commons and the reparations process begins.] Section 159 would be repealed. Errors from the Purge of the 1950s through the 1990s resulting in criminal records of individuals would be corrected by the destruction of such files. Civil servants and military personnel who lost their livelihoods from this discriminatory policy based on sexual orientation will share in a 110 million Canadian dollar settlement of a class action suit.

Family Law
Blog
Reading time: 4 mins
How to Protect your Inheritance from Separation or Divorce
If you have received an inheritance from a loved one, chances are it was intended for you personally, and not[...]
Read More >